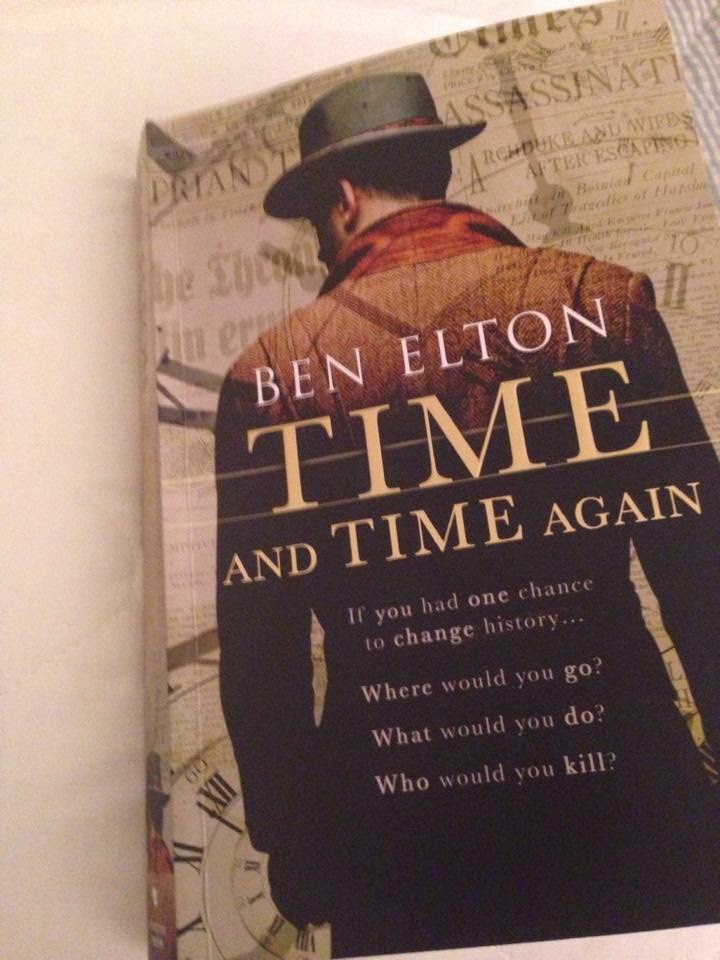 “If you had one chance to change history…Where would you go? What would you do? Who would you kill?”

It took me a while to finish reading this book and I’m still unsure what to make of it, even though there’s a lot to like – the promise of time travel, alternative history, action and Elton’s reputation as one of the world’s best satirists.

What I didn’t expect was that it would dissolve into time traveller’s compendium of clichés.

The year is 2024. Hugh ‘Guts’ Stanton, a ‘mysterious, tall, blond and fiendishly dishy Englishman’, an ex-Special Forces turned internet celebrity (something like Bear Grylls meets Daniel Craig as James Bond), is adrift following tragic death of his wife and children.  Soon, he is recruited by his former history professor and the Trinity Master at the Cambridge University, Sally McCluskey, for a very special mission – to travel through time to 1914 and save one monarch (Archduke Franz Ferdinand) and kill another (Kaiser Wilhelm) and prevent the Great War. We learn that this is possible because of a secret discovery made by Sir Isaac Newton (so, he wasn’t mad after all?) that gravity affects time, ‘like a slinky’, allowing one to step into the past and fix it. And who is better equipped or more entitled to tinker with history than the British?

As soon as Stanton (and McCluskey) steps from 2024 and into 1914, the story starts to crumble. Elton’s initial tongue-in-cheek description of McCluskey as a Gorgon-like crone – old, fat, booze swigging, chimney smoking, with I don’t-give-a-shit attitude – is clearly a poke at the Oxbridge institution. For a woman to become the Master of Trinity, she would no longer resemble a woman, but an ugly, mythical creature, a she-man.  But, soon, too soon, she dissolves into a mere caricature who, when challenged about a historical accuracy of an event, responds with a resounding “Whatever!”  Yes, I’m sure that an eminent Cambridge scholar would be saying something like that in the distant future that is 2024.

It seems that Elton doesn’t quite know what to do with the 1914 McCluskey and consequently she never gets off the train heading to Sarajevo. Unfortunately, from this point, the story, buffeted by the hailstorm of clichés, is hurling towards a disaster.

By now, I started to wonder why anyone would bother spending a small fortune to study history at Cambridge when all they need to do is read Wikipedia, particularly when Stanton starts to wax lyrical about ‘the brave and noble’ Archduke, who ‘like him, had guts.‘  The Archduke is good, the ‘terrorists’ are bad;  that pretty much summarises the events of the 28 June 1914.

Stanton fulfils his mission in Sarajevo, but not quite as he planned. You see, it is the women. They are everywhere and it is their fault that he is distracted and makes moronic errors.

First, it was the sneaky McCluskey. Then, there’s the dead wife who haunts him through time and space. In her honour, he has to prove he is the man she once married ‘cool, but not cold’.

This is why he saves a Turkish woman and her daughter in Istanbul (or is it Constantinople. Elton annoyingly keeps switching between the two) and is kind to a pretty flower girl in Sarajevo. Both events threaten to have disastrous consequences on his mission.

And then he gets a ‘second chance’ with Bernadette, Irish suffragette, who Stanton decides is pretty before he even sees her. And of course, she is not only independent and bi-sexual, she is all strawberry blonde hair and emerald eyes. And pubic hair (yes, nothing quite captures Stanton’s attention like pubic hair of 1914). It is love at first, convenient sight. Of course, we soon learn that Bernadette is only pretending at being a suffragette “Well, I don’t know what life you think it is I’ve dropped, Hugh. I’m the original bored and pointless rich girl.”

Then there’s the famous revolutionary Rosa Luxemburg who Stanton decides to save from the maddening crowd (they go mad after he kills the Kaiser) because Bernadette admires her. ‘Such a small face. Such a small woman.’

But then, a surprise. Somehow, this runaway train makes around the sharp bend and we meet Katie or KT, another time traveller. Here is the most interesting character, who, unfortunately, arrives too late. (I’m sure I will one day forgive Elton for giving Stanton the power of a male gaze to turn a tortured soul to a ‘fine, noble face’ “Stanton found himself wondering if she might even be beautiful”. Ugh!) We get a glimpse of an alternative history, of an Orwellian world that was the result of Stanton’s actions, the butterfly effect at its most frightening. A glimpse of another story that should have been told instead.

Time and Time Again promised a lot, but failed to deliver. I wonder what this story would have been like had Elton fully unleashed his satire and his acerbic wit -think Pratchett meets HG Wells. Or, how powerful and poignant it would have been had it been told from KT’s point of view.